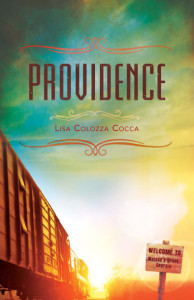 “I first met Baby Girl in a freight car.
I was carrying a bag.
She was sleeping in one.”

When Becky runs away from home she sees it as a temporary solution to a problem. Finding an abandoned newborn is nowhere on her radar. Yet only hours after leaving home, she finds herself in a new town making decisions that will affect both Baby Girl and herself. As she forges bonds with the people in town and the infant she has rescued, Becky becomes more tangled in the web of lies she has hidden behind. Who can she trust with the truth?

Becky’s sweet-as-honey first-person narrative voice suits the dialogue-driven story well  –  she is an uncomplicated heroine, resourceful and completely without self-pity. Teens who take a special interest in realistic fiction may want to check this one out.

“Rosie, Becky, and Georgia Rose create a family built of mutual need, love, and kindness in this gentle tale of life in nostalgic small-town America … . Cocca portrays a community of sympathetic characters … who believe in the promise of life’s second chances.”

Discussion Questions: PROVIDENCE
1. In the book, Baby Girl is abandoned in a freight car on the same day Becky runs away from home and hops into the freight car. Later, Becky meets Rosie when she ducks into the store to avoid the police. Rosie sees this as providence – a situation destined to occur under the direction of a divine being. Do you believe some events in life are simply meant to be? Did your belief or lack of belief in destiny affect your reactions to Becky’s story?

2. Becky says she sees herself as an honest person, yet her entire life in Watson’s Grove is built on lies. Think about the way the other characters react to Becky when she first arrives in town. Would she have benefitted or suffered from being honest with any of them?

3. In many ways, Watson’s Grove was as much a character as a setting. How did it change and develop strengths over the course of the story? What does its rejuvenation say about small towns in general?

4. Providence has been described as a “coming of age story in reverse.” Which details in the story support this perspective?

5. Becky often draws on her daddy’s words of wisdom. On page 58, she says, “When it came to money, Daddy got his sayings right.” What does this reveal about what Becky thinks about her father?

7. What five words would you use to describe Lily? Did your opinion of her change over time? Did knowing her backstory make her easier to understand?

8. Examine Rosie’s relationships with the other townspeople. Could Becky have assimilated into the town without Rosie’s backing?

10. We learn about Becky’s family through a series of flashbacks, letters, and her parents’ overall lack of action after Becky leaves. Despite her difficult relationship with her parents, Becky never seems to completely cut the emotional ties that bind her to them. Is your family always your family, no matter what? Do you think Becky will one day go back and take Mama away from the farm? Do you think she will deal face-to-face with her father?

11. Becky’s relationship with Jeanie seems more relaxed than her relationship with Sarah. Why does this difference exist? Why does Becky open up to Jeanie in the end? What does it tell us when she doesn’t tell Jeanie the whole truth?

12. The story is told completely from Becky’s point of view. How might it have been different if it had been told through one of the other characters’ perspective? What if it was told from an omniscient point of view?

13. What universal themes are found in the book? Is one supported more strongly than another?

14. Did Becky make the right choice in the end? If not, what should she have done?

At Barnes and Noble
On Amazon